Posted by Submariner at 7:48 AM No comments:

THE NINE LIVES OF MARION BARRY 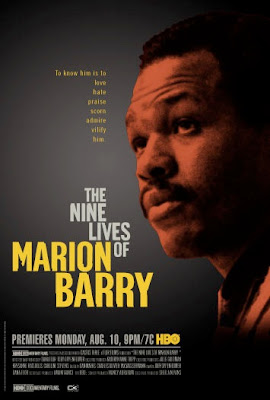 Many people remember Marion Barry as the philandering, drug- using mayor of the nation’s capital who was famously caught in a 1990 FBI sting operation. Yet others know him as a folk hero, a civil rights champion and defender of the poor. Barry’s soaring achievements, catastrophic failures and phoenix-like rebirths have made him a symbol of mythic indestructibility. Who is Marion Barry, really? A hero? A scoundrel? Why is he such a polarizing force? And why do people still vote for him? For the first time, THE NINE LIVES OF MARION BARRY reveals the complete unforgettable story, bringing into sharp focus Barry’s journey from Mississippi cotton fields to the corridors of power, from drug and alcohol addiction, cancer, four marriages, jail time and political extinction to dominance over Washington, DC city politics for more than 40 years. The film presents all sides of Barry—good, bad and ugly. Using archival footage and a verité look at Ward 8—the historically troubled and forgotten section of DC’s southeastern quadrant— during Barry’s 2004 campaign for city council, political passions and historical and contemporary perspectives collide. Just as importantly, Flor and Oppenheimer show how Barry’s story is inextricably linked with DC’s own twisted narrative—a black- majority city with no representation in Congress.
Posted by Submariner at 5:14 AM No comments:

A Loaded Gun on the Table

Posted by Submariner at 5:49 AM No comments: